← back to
Agogo Records
Get fresh music recommendations delivered to your inbox every Friday.
We've updated our Terms of Use. You can review the changes here. 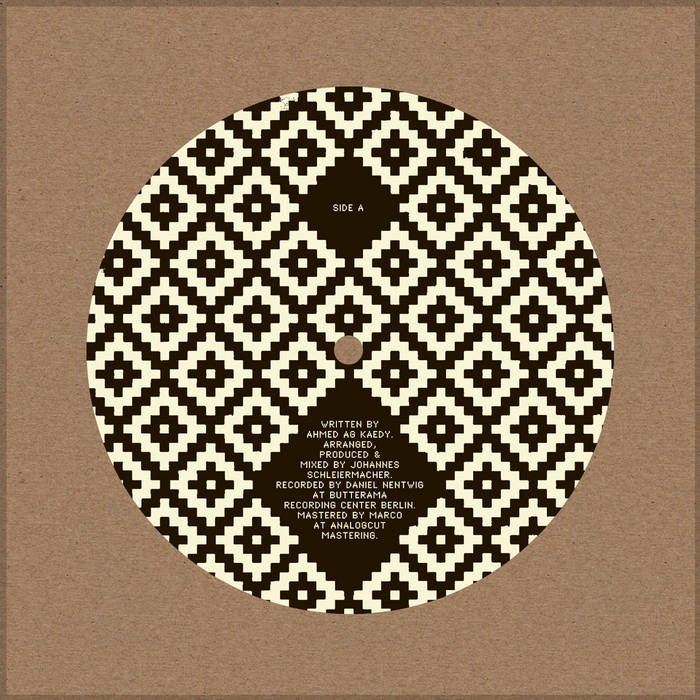 "It's been in February 2017, the full moon was shining brightly and a soft breeze provided a nice contrast to the days heat, when me and Ahmed Ag Kaedy spent our time sitting on a rooftop terrace located in the Tuareg-district of Bamako. We we're talking about the intentions of North Malis Tuareg to gain independence, Ahmed served sweet tea only to play me some of his new songs later throughout the night. Hours passed and we came up with an idea – relocate Ahmed to Berlin to fuse his distinct Desert Beat with influences from the cities Jazz and World Music scene. Two phone calls were enough to get the ball rolling, even though we knew that a few shows set up short term would only be able to cover his travel expenses.

Without many people noticing, oftentimes its the bass players who're responsible for not only a projects groove but also the beat and its rhythm. For example we saw Kalle Enkelmann, the man on bass for Onom Agemo & The Disco Jumpers, founding the band Orion Congregation on the fly, a musical outfit both incorporating artists active in Onom Agemo as well as the brass section of the Omniversal Earkestra. They set up a highly acclaimed series of shows at Berlin Friedrichshain BLO venue featuring several guest musicians in which seemingly endless Desert Beat phrases were garnished with furious sax impro sessions or 70s space synths by Johannes Schleiermachen as spine-tingling Hammond action by Embryo's Michael Wehmeyer.

Throughout these days Onom Agemo were busy recording their latest studio album and invited Ahmed to record with them, an invitation resulting in two tracks heavily inspired by their aforementioned live sessions. The outcome is quite a journey, merging classic Tuareg rhythms with the Disco Jumper's distinct interpretation of Afro-Berlin-Jazz. Using his Stratocaster we experience Ahmed Ag Kaedi in constant search for new rhythm signatures whilst providing a thrilling guttural vocal contrast to traditional Tuareg choir passages.

Ahmed's native home is located deep within Sahara desert, way beyond the Tuareg town of Kidal. His songwriting process takes place under the nightly stars, sitting by the campfire or throughout the day when he's on the lookout for goats, camel-back riding whilst covering his face from the merciless sun and the ever present sand of the region. Always with him is his 12V amplifier, usually fastened to his saddle, his guitar on his knees, rolling along with the rhythm of his mount. So it's no surprise that he defines his personal beat as a beat that makes camels dance.

He spent his youth as a mercenary fighting for the Ghaddafi army, believing in the, never fulfillied, promises made about an independent Tuareg nation of Azawad. After realizing that he's only used as a figure in a game of chess, played by forces beyond his own imagination, he decided to replace his AK47 with a guitar. His lyrics deal with topics present in today's Tuareg society, which is looking and fighting for an identity of its own whilst being trapped between globalization and islamic fundamentalism, a set of topics and themes that's now transferred, translated to and becoming relevant for first world listeners through his collaboration with Onom Agemo.

The track „Onin Okalan“ - realization – is a plea for hard and honest work ethics instead of looking for fast and maximum profit, especially inspired by an increasing bunch of youngsters to be found in and around Kidal using only their AK's to make a living. Ahmed himself was threatened by folks like this multiple times, raising concerns about how his music is not compatible to Sharia laws. But Ahmed strongly feels that confiscating his very own equipment only happens for profit instead of religious reasons. From his point of view this special song is a call to defend the generation old value system of the hard working Tuareg people – in short words: honour and respect vs, the powers of the new economy.

„Aljahalat“ - ignorance – is about the nearly non-existing educational system in the northern part of Mali which is a divided country in terms of education and privilege. The Tuareg communities are not really funded by the countries central government and only a few kids learn to read and write if they're not attending Islamic schools paid for by the Saudis. Even though Malis overall educational system is way beyond satisfactory, it's impossible for Tuareg children to even get basic education in a secularist environment as the state sees the remote areas of North Mali only as important because of its raw mineral deposits but doesn't take care of its schools and training centres at all."

Sampa The Great joins the show to discuss her release, "As Above, So Below".